This article has been prepared by Dr David Jefferys FFPM, with input from Dr Penny Ward FFPM.

How to cite:
Jefferys, D (2020), ‘The End of the Transition Period and Recent announcements from the MHRA’, Faculty of Pharmaceutical Medicine blog, 23 December 2020. Available at: <LINK> (Accessed: <DATE>).

At 23:00 on Thursday 31 December 2020 the Transition Period will end and the UK will no longer be a part of the EU. Much will change from the beginning of January 2021 when the MHRA will be a sovereign regulator outside of the EU centralised system.

Over the last few weeks we have seen a large number of guidelines released and updates of previous guidelines. Because of the Northern Ireland (NI) Protocol established through the Withdrawal Agreement, Northern Ireland will remain within the EU regulatory system and this requires that medicines, medical devices and diagnostics must comply with relevant EU requirements in order to have ‘unfettered access’ between Northern Ireland and the Republic of Ireland. Current Centralised Authorisation Products (CAPS) will remain valid in both NI and Great Britain (GB) following transition, although these will need to be progressively converted to a GB product license to maintain registration in the UK.  Adverse reactions for patients in Northern Ireland will be reported, as pre-EU exit, to the MHRA and to Eudravigilance; in contrast in GB adverse reaction reports will be made to the MHRA database alone. Mutual Recognition and decentralised procedure (DCP) products will remain part of the EU system for Northern Ireland and to avoid disruption the MHRA has pragmatically decided that GB will continue to follow the EU decisions – effectively adopting automatic mutual recognition – on these products going forward for future variations and data sheet changes.

For new applications the UK is offering two routes. For two years there will be a ‘standstill period’ during which there will be a ‘reliance’ route . Under this route a company can apply to the MHRA to recognise an EU/CHMP opinion. The applicant company has to agree that all subsequent variations will also use this approach. The full details of this procedure are awaited but the authorisation could be granted by the UK at around the same time as the EU authorisation is granted. In the event this is delayed, ‘market exclusivity’ will run from the date of the UK approval.

This is all pragmatic and rather routine.  However, we are also seeing some interesting and exciting offerings from the UK, particularly for new products offering significant therapeutic benefit, addressing unmet medical need or providing public health benefits. These include an ‘accelerated approval’ route, open from January 2021. The procedure will involve iterative or rolling reviews and take just 150 days to a regulatory decision. This is very attractive.

In addition the MHRA Agency has just announced the Innovative Licensing and Access Pathway (ILAP), a very welcome offering, which builds on the proposals put forward in Sir Hugh Taylor’s report Accelerated Access Review.  The UK proposal builds upon some of the regulatory flexibilities/agilities used during the COVID-19 pandemic and makes a reality of (so-called) ‘pull through’ product development. The process brings together a suite of offerings including extended and early scientific advice which may also involve the UK HTA bodies (NICE and SMC). There can be support from the MHRA Innovation Office and support for innovative  manufacturing. Support will also be available from National Institute for Biological Standards and Control (NIBSC) for innovative biotechnology products including cell therapy, tissue products, gene therapies and vaccines.

The Early Access to Medicines Scheme (EAMS) has been very effective and will form a part of the new offering and may be further modified and integrated into ILAP as the scheme evolves. ILAP is, in effect, bringing together a suite of facilities and offerings  with enhancements and linkages of the various components. CPRD has for some time made available the option to identify NHS patients for trials and this recruitment aid may be enhanced.  A key part of ILAP will be accelerating the access to and uptake of innovative new medicines by the NHS. Here the enhanced linkage with NICE, SMC and the work of the Accelerated Access Collaboration under Lord Aru Darzi will be critical.

This is a bold move by the UK MHRA. There is an ongoing small pilot project which, it is understood, has helped model the programme and can be seen as a ‘pick and mix’ approach and can be adapted for the requirements of different molecules and technologies as experience is gained. In the initial phase quite late development projects can use the latter elements which have been announced while the full suite of activities may assist products at an earlier stage of development.

Quite rightly the MHRA have sought to position ILAP with the recent announcements that the UK has joined both the ACCESS and the ORBIS programmes. The former is a ‘reliance – work sharing programme’  to facilitate the approval of both new medicines and generics between Canada, Australia, Switzerland and Singapore (with Brazil scheduled to also join). The latter involves the US FDA , Australia and Canada and is open to both NAS and new indications for oncology medicines.

The UK has hitherto played a major role in the International Committee on Harmonisation (ICH) since its inception 30 years ago, but as part of the EU delegation. MHRA has applied to be a full independent member of ICH from January 2021.

The MHRA has been widely recognised to have adapted rapidly to the COVID crisis and is one of the global leaders in introducing ‘regulatory flexibilities or agilities’ in response to the challenges that the pandemic has posed. The Agency has positioned itself well for the future and has taken advantage of the learnings from the pandemic adjustments in adapting regulations for the more independent future. The first western approval of a COVID-19 vaccine using a rolling/iterative review is seen by many as a clear statement of intent. In this respect, it may be remembered that during the HIV-Aids pandemic in the 1980s, the UK was the first country worldwide to approve an anti-retro-viral, zidovudine, for clinical use.

There has been a long tradition of regulatory innovation from the UK and these announcements show that this is set to continue and enhance. This will be crucial, especially as we anticipate the developments in digital medicine and the next phase of targeted molecular medicines.  It is good to end this year on a positive note. 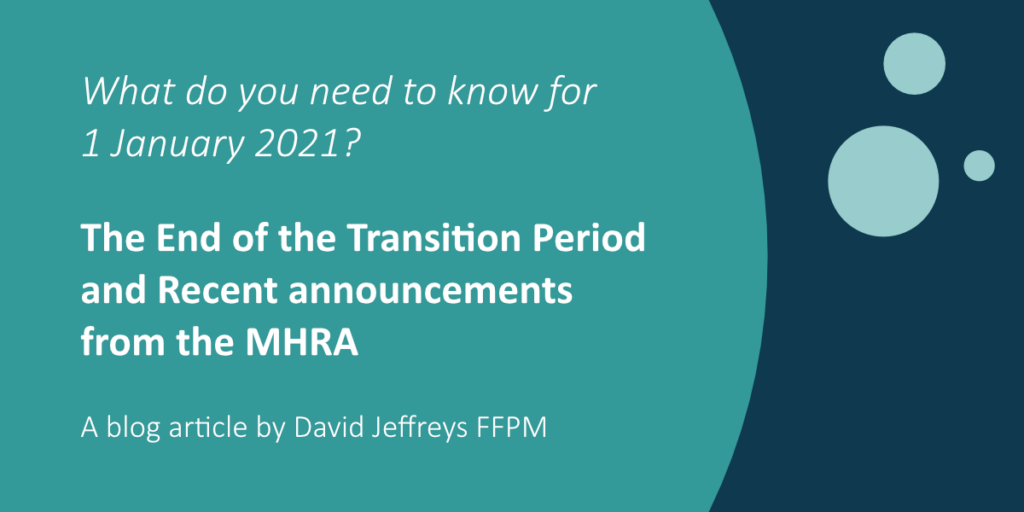