I was a die-hard NHS doctor and, like many of my confederates, to me “Pharma” was the enemy. In fact, I think, unfortunately, many NHS doctors still feel that way. The trouble is that the industry has a certain reputation and having worked in pharmaceutical medicine, for the best part of the last seven years, I think it is undeserved.

At the start of my career, I didn’t have a good appreciation of what “pharma” involved and I assumed it was about big companies profiteering from the most vulnerable and trying to bribe/cajole medics into prescribing their medications and making the companies wealthier. I believed that any noble aims espoused by said companies were merely rhetoric aimed at pushing their medicines and, in turn, their profits.

I had a very black-and-white view of the work I did in the NHS versus that being carried out by “pharma”. The biggest lesson I have learned is – we all work in the grey.

I was privileged to have parents that felt education was important for all their children, regardless of gender, and I was nurtured academically. I remember standing against a wall with my older sister, at perhaps age 5, reciting our times tables to our father.  As I grew up, I remember my mother saying she wished that one of her children would become a doctor and I was the only one attracted to the profession, so I was determined to become one.

At age 17 I attended a university open day at Imperial College London for prospective medical students. I remember the speaker telling the audience that if someone puts a gun to your head and says “medicine or your life” we should want to study medicine so much that we choose medicine, and presumably, the bullet. I left that event thinking I obviously did not want to be a doctor enough to choose it as a career because I would definitely, and I think quite reasonably, choose my life.

After that I took a somewhat convoluted path into medicine by studying biomedical sciences first and then gaining a place in graduate-entry medicine. I am glad that I did because I think that university taught me valuable life lessons and I am glad that I got to experience it before embarking on medical training.

Fast-forward to 2009 and I am a newly qualified doctor starting my first job where I found practicing medicine wholly different to studying it. I remember on my first weekend on-call as a brand new FY1, it was so busy, there was so much to do. I received bleep after bleep, and I was prioritising as best as I could. It was late afternoon and I was walking into the renal ward, eating a mars bar that I had just managed to grab from a nearby vending machine. It was the first thing that I managed to eat all day, which is fairly typical of a medical on-call! A consultant saw me and demanded to know why I hadn’t been to cannulate a patient on the ward as I had been asked to do earlier. The consultant angrily informed me that they would now need to put in a central line. I lost my appetite and felt demoralised. When asked where I had been, I mumbled that I had been called to see a patient with an INR of 7 and a potassium of 7. I later discussed the incident with my seniors who agreed that I had prioritised appropriately, but ultimately, I realised that everything is a compromise. I’m delivering the best care that I can, within the systems that I work.

In December 2013 I was working in the most unpopular placement of the deanery where I was commuting about an hour each way in to work as I didn’t want to relocate for the fourth year in a row. The placement was demanding and the schedule fairly gruelling given it was winter in paediatrics. I was on my way to work and the last thing I remember is pulling away from my kerb. I must have had the accident about 40 minutes or so into my journey, but I don’t remember anything from the remainder of the day or the next. 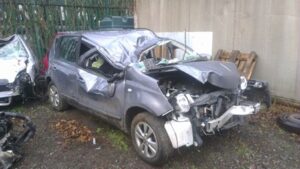 I was lucky to get away with just a brain injury and a broken hand and jaw. I lost my second and third languages and had real trouble following English. I was elated to have survived and I was eager to get back to work, but this was a big turning point for me.

Even the simplest tasks were hard and exhausting. I felt so incapable, it was a real shock to the system. Over the next couple of years, a lot of things changed for me, and I was forced to re-evaluate what I needed from my career and for my life. Even working part-time in medicine, I worked more hours than the average full time office worker. It made me think perhaps there was another way. Like I said, I was a die-hard NHS doctor and if my deanery hadn’t put me back in the same hospital, at the same time of year, I may have persevered, but they did and the PTSD from the commute was awful. I knew I had to leave.

This is when I first considered entering the world of pharmaceutical medicine, but I didn’t have a clue how to get in. I was fortunate enough to see an advert for a job in a phase 1 unit and before I knew it, I was in! I had no idea what it involved but I was helped by my colleagues. Finally, I was doing something that I felt able to do, full-time and I was gradually able to get my confidence back.

One of the great things about pharma is the variety of roles that you can do. Unlike the more traditional medical specialities, no two jobs within pharma are the same. In addition to the variety of companies you can work for; big pharma, biotech’s, CRO’s and regulatory bodies, there are many different roles you can take, each with a unique focus [for more information about the types of medical roles within pharma please click here]. I was grateful that for the first three years I maintained ‘patient’ contact as I was screening healthy individuals for inclusion in clinical trials and looking after them whilst on study. It bridged the gap between my former career and this one.

On one of my studies, all the volunteers bar one, developed type IV hypersensitivity reactions and I was responsible for managing them. I was grateful for my clinical experience as it meant I could more easily organise their care. I was even thanked by the company sponsoring the study for the way I handled the situation. That was really important to me because it reminded me that pharmaceutical medicine and clinical medicine are not so different and equally valuable.

Pharmaceutical medicine is highly regulated and therefore stringently controlled. It’s not the unethical ‘dark-side’ I naively thought it was. This is especially true in my latest role. I have been blessed to land a job in a small pharma company that is truly allied with my personal values. We re-formulate existing medications, including in paediatrics (my first love) so that they can be optimised for the patients taking them. Is there a lot of money to be made here? No, not particularly, but you know what? The lives of the patients we serve are significantly improved, their long-term outcomes can be improved, and a problem has been solved that many physicians were unaware existed. This is the difference I can make. Not just to one child, but to hundreds and in the future, thousands.

So back to training – I am at the beginning of my journey, in fact, my first ARCP is round the corner.

I have worked in three companies that support pharmaceutical medicine training and started mine during the pandemic. It follows the same path as the other medical specialities with a portfolio, a curriculum and educational supervisor meetings. For me, I have found the support of my educational supervisor invaluable. I find PMST relaxed compared with paediatric training and, unlike paediatrics, I do not have to worry about fitting training in alongside service provision. Here I am being trained every day. PMST gives me structure and a focus to my learning which is important for me because I don’t tend to prioritise my own development outside of my role. Personally, I know you can work in pharma without entering the training program, but to get a true appreciation of all the different facets, I think it’s important to do it. I hope you’ll join me on this journey and if you want to talk about this more please feel free to contact me at naila.aslam@protonmail.com.

What is Pharmaceutical Medicine?

Find out about FPM membership